Link to this page

Miami Canal Cincinnati
Order a Hand-Painted Reproduction of this Painting

John Henry Twachtman was born in Cincinnati, Ohio and received his first art training there under Frank Duveneck. Like most artists of the era, Twachtman then proceeded to Europe to further his education. He enrolled in the Academy of Fine Arts in Munich in 1875 and visited Venice with Duveneck and William Merritt Chase. His landscapes from this time exhibit the loosely-brushed, shadowy technique taught at Munich. Twachtman also learned etching, and sometimes carried etching plates with him that he could use to spontaneously record a scene.

After a brief return to America, Twachtman studied from 1883 to 1885 at the Acadèmie Julian in Paris, and his paintings dramatically shifted towards a soft, gray and green tonalist style. During this time he painted what some art historians consider to be his greatest masterpieces, including Arques-la-Bataille, in the collection of the Metropolitan Museum of Art in New York, and Springtime, in the collection of the Cincinnati Art Museum. 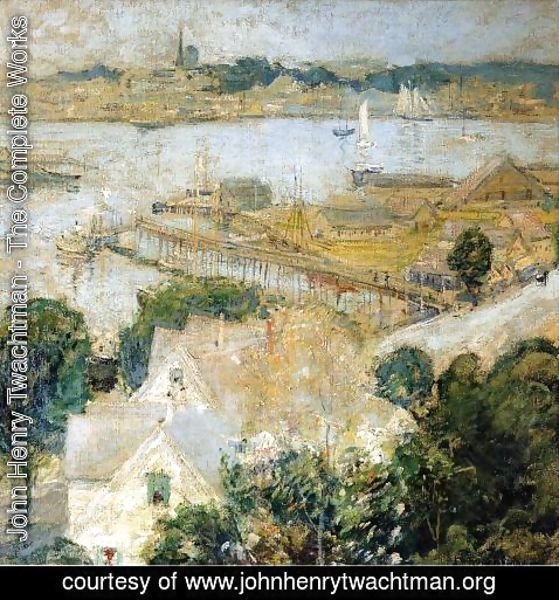 In 1886 he returned to America and settled in Connecticut, eventually buying a farm in Greenwich. He often painted and exhibited with fellow artist Julian Alden Weir, and spent considerable time at the art colony in Cos Cob. His presence was vital to the colony:

"Twachtman's temperament--by turns gregarious and introspective, restless and serene--was a major factor in preventing the Cos Cob art colony from becoming a backwater of nostalgic complacency. Ironically, his lack of commercial success contributed to his artistic independence, freeing him from the temptation of producing salable pictures according to a proven formula. His art, conversation, and teaching fueled the creative fires of his friends and students in Cos Cob."

In addition to his oil paintings, Twachtman continued to create etchings as well as drawings in pastel. Twachtman taught painting at the Art Students League from 1889 until his death in 1902.

In Connecticut his painting style shifted again, this time to a highly personal impressionist technique. Twachtman painted many landscapes of his farm and garden in Greenwich, often depicting the snow-covered landscape. He executed dozens of paintings of a small waterfall on his property, capturing the scene in different seasons and times of day. Late in life Twachtman visited Gloucester, Massachusetts, another center of artistic activity in the late 19th century, and produced a series of vibrant scenes that anticipated a more modernist style yet to gain prominence in American art.

Twachtman died suddenly in Gloucester of a brain aneurysm, aged 49. Today, his works are in many museum collections including the Metropolitan Museum of Art, New York; the National Gallery of Art, Washington, D.C.; and the Museum of Fine Arts, Boston. (From Wikipedia)

Report an error on this page